There is no doubt about the quality of both these tires in the Continental Grand Prix 4000s II vs Gatorskin comparison.

Continental is one of those brands that rarely disappoint its customers with built quality, design, or any other attributes.

As you know, these tires are popular among a different range of riders because of several reasons.

However, a comparison between the Grand Prix and the Gatorskin is needed to give detailed info about these tires.

Both of them have similarities and differences. So, choosing the best one or the best one at least for you can only be done after considering all the following facts.

After all, tires are the first thing that comes on the list of important things in a bike.

It is the core reason for safety, comfort, speed, balance, suspension, and many other bike ride aspects.

That means it is important to have the best tire on your bike to get the amount of money you can spend.

And these two are undoubtedly in the loss of that kind of tires. So, read the following to get an idea about the best one from them.

First of all, Continental is known for its handmade tires. All of its tires are handmade since 1871. And all of them have great built quality.

That confirms the traditional value of each piece of tires they manufacture alongside all the advanced modern technology levels and its benefits in the products.

It uses a special compound named Black Chili from inside the company itself. This compound has an important role in the high performance and other advantages of these tires.

Black Chili is responsible for the reduced rolling resistance by 26% and improved grip by 30%. Moreover, it adds 5% more mileage out of your tire.

Like most of the Continental tires, this one is also equipped with technology that can resist punctures. It is done with the help of reinforcing and matrix fibers made of Vectran.

Vectran is 5 times strong as a steel sheet, and it is lightweight and abrasion-resistant. It can protect your tires from punctures and cuts easily than other tires with a double layer of nylon material.

Finally, it also colors coordinate to your bike without losing any of the Black Chili compound’s performance. 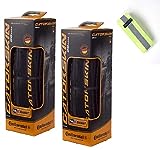 Continental GatorSkin is the next one from the comparison of continental Grand Prix 4000s II vs Gatorskin tires.

The brand pitches the product as a one-for-all product that can be used for different purposes, such as sport, training, and commuting.

However, it cannot be recommended on too much rough surface like extra rough mountain areas.

Besides, it also has the extra layer of protection with Continental's PolyX breaker puncture protection that will easily resist any kind of cuts.

GatorSkinn tires are also available in different sizes and have a very easily foldable nature.

The small side grips of this tire give a good grip on the ground, and there is not much weight penalty.

After all, the ride is smooth, fast, and subtle over the bumpy tarmac without making any compromises on the rigidity of the sidewalls for puncture resistance.

This tire can be used with tour bikes for greater durability and consistency. Besides, it can give you the right amount of friction without resulting in too much drag while on the ride.

Gatorskin tires are viable with racing cycling as they can deal with intense training and high speed. In any case, they are worked to last and can be utilized for various types of trekking conditions.

Even though there are similarities and differences between both of these tires, go through the following points to find out where they become different.

Black Chili is the material used on the Grand Prix to give more grip and reduce resistance.

However, both tires have puncture-resistant PolyX material on the sidewalls for durability.

Grip and the Thickness

The Grand Prix has more of a thin structure than the GatorSkin because of the tubular structure, making it lightweight.

So that the GatorSkin has a more strong base and comfort when compared to the Grand Prix.

Both of the products have pretty similar resistance to the materials used and the way they are used.

Although Grand Prix is the latest model and has some of the latest technology used in the manufacturing process, it has a lower spinning resistance.

When finalizing the comparison between these two similar-looking tires, you can come up with two different conclusions.

As mentioned, if you are looking for more comfort throughout a long ride and never need a much sporty feel, then the Gatorskin is the one for you.

Besides, the Grand Prix 4 Season is for you if you are going for a tire that can be used around sports activities and can achieve more speed with little resistance.

Are these tires tubeless?

Continental does not make any tubeless tires as of yet.

Is this GatorSkin tire is really foldable?

Yes. They can remain folded until you want to install them with a tube.

What about the rotating direction of these tires?

You have to install the tires according to the arrows given on the side of the tires.

Can I use these tires on both sides of my bike?

Yes, you can use both of these tires on the back or front end of your bike.

In this comparison between the Continental Grand Prix 4000S II VS Gatorskin, both have their own pros and cons.

So, it is important to find out the real need for these tires for you and then compare them together.

On a final note, both of these tires are in the list of well-built tires and most recommended for professional athletes and common riders.

You can go with the Continental GatorSkin or the Grand Prix if you are looking for a flexible road bike-friendly tire.

So, the best tire from both these products varies regarding different individuals and their needs. You have to make a wise decision after considering all the details mentioned above.